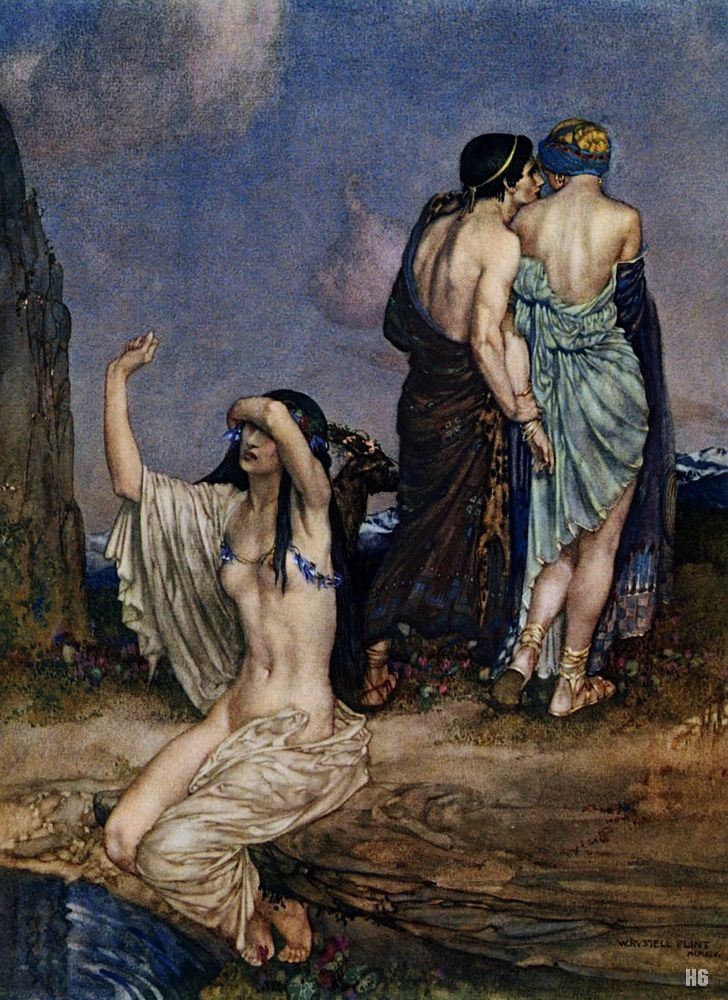 ​Paris, Helen, and Oenone in the Roaring Twenties

This art piece, “Paris Leaving Oenone For Helen”, made by William Russell Flint in 1922 uses interesting visual elements to bring a new perspective to the classic myth. In the foreground, Oenone sits on a ledge, shielding her eyes with her arm, with another hand raised into the sky in front of her face, almost as if she is trying to block out her view. The ledge she sits on is reminiscent of the cliff she stood on when she saw first saw Paris with Helen, and there is a small pool at her feet, like a tiny, calm ocean. Behind her, with their backs to her, stands Paris, to the left of Helen. Paris is clasping Helen’s arm possessively, and is whispering into her ear. The pair is looking out at the mountains, presumably Mount Ida, where Oenone lives. While Oenone wears white, the color of purity, the other two figures are wearing rich colors, a symbol of wealth and decadence, as well as a more modern concept. Helen’s shorter hairdo and dress likens her to a flapper, a cultural group gaining popularity during the “roaring twenties” when this painting was made. Her manner of dress starkly contrasts Oenone’s longer garb, which, while revealing, trails down to her ankles. The comparison between the two is a strong parallel to the comparison between the “conventional” woman of the time period versus the “modern” woman emerging in that era, and calls to mind many stereotypes around flappers. Flappers were generally seen as less moral, doing such improper things in full view of the public, like drinking, flirting, kissing, and dancing. Aside from this comparison, the body language of the characters, with their backs to each other, shows that Paris has turned away from Oenone, and she cannot bear to see him either. Instead of looking at his past wife, Paris is looking out towards the sky, the mountains, and the future with his new wife, Helen.
To Scansion