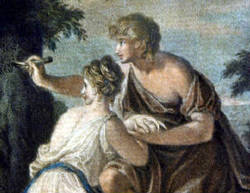 One of Ovid’s earliest works, a collection of fifteen epistolary (letter) poems, The Heroides is a fascinating view into the female perspective in many male centered myths, as seen by a man. The work this author chose to focus on, “Heroides V: Oenone Paridi”, exemplifies some of the common views of women in Roman culture, as well as portraying the lesser known past of the classic myth of the judgement of Paris and the Trojan war. To understand the cultural significance of this letter poem, of course, you must first understand the text itself. To that end this author has translated a notable passage, but for a quicker, more comprehensive take on the text, has included a paraphrased summary in the next paragraph.

The poem starts off with a curt greeting, addressing Paris and identifying the author as Oenone, his first wife. She then describes the bitter pain she feels due to her undeserved predicament. But, instead of dwelling on her heartbreak, she continues on to a lighter topic: the young lovers’ early life. They lived together in a rustic hut, and explored the forest together, hunting, tending sheep, and napping in the shade of trees with each other. Oenone showed Paris the best places to graze his flock, and where to hunt, and they shared an idyllic life in the wilderness. Paris even carved Oenone’s name into the trunk of a growing tree, along with an oath that, should he ever forsake her, the waters of the river Xanthus would flow backwards. Oenone pauses in her recollection of these happier days to pray that the rivers change their direction to hold the pledge true, for Paris has forsaken her. Moving on, Oenone writes of the fateful judgement of Paris, and calls the events that transpired to force him to choose between the three goddesses, “evil”. She then goes into detail on their tearful leavetaking, in the passage this author translated. She describes the preparation of his ship, with Paris cutting down trees just as he would soon cut short their time together, but also the touching moments of their goodbye: the tears and weeping as he left; how closely he wrapped his arms around her neck; his feeble excuses that the wind was too weak to leave, which none of his shipmates believed; and, finally, how often he returned for another kiss while he could barely say goodbye. Oenone then juxtaposes this emotional scene with another when she jumps forward in her story to his return. She recalls how she sees his ship, but then sees purple cloth, which is not his fashion. The cause? The “vile mistress”,  Helen, clinging to her dear husband’s chest. Oenone wishes then that Helen might feel the pain that she feels then, and pleads Paris not to forget his humble origins, nor dismiss her for accepting those poorer conditions, as she is a “worthy” wife for a great man, whose love brings no war. Helen, instead, is a shame for Paris, as she is a foreigner with an army at her heels, a disloyalty not only to Paris’ first wife, but also to his country, and furthermore, a woman who has abandoned past husbands and will do the same to Paris. Of course, Oenone chastises herself for not seeing it coming, as it was prophesied by Cassandra, Paris’ sister. Oenone goes on to attack Helen’s chastity with a subtle barb, asking, “do we believe she returned a virgin?” from her past journeys. Oenone then describes her own efforts to avoid sexual advancements, and her ultimate struggle as she was raped by Tros, the builder of Troy, who then taught her the ways of medicine and herbs, which, she laments, could not cure her of her love. She prays for a relief of the pain that she suffers from her love, and at the same time issues one final wish - that she may spend the rest of her days with Paris again.

With this story, Ovid shows how Oenone feels betrayal and anger at her lover’s leaving; however, she still desires her unfaithful husband’s return. The story also highlights the prized concept of virginity and chastity in a woman, especially in the attack on Helen’s supposed impurity. Oenone stipulates what makes a woman a desirable wife, “worthy” of a husband such as he, are several concepts that are more important in the context of a woman: virginity/sexual innocence; faithfulness to her husband; and finally, social status. Oenone speaks with shame about her loss of her virginity to Tros, but does not hint at any shame on his part, implying that sexual modesty is a requirement for women but not an issue for men. She also spends a long time in the beginning of the poem emphasizing her togetherness with Paris, and how she stayed with him and helped him. While this is framed as the “love” part of their story, Ovid clearly has woven notions of faithfulness to the point of servitude into the very idea of love and romance. Her loyalty to him, even after he forsakes her, is the strong, final note of the poem, an arguably unfair fate for her, as the love she still holds for him is unjustified by his behaviour. As for the last point, Oenone repeatedly brings up her status, and how she deigned to marry below her status when she married him, and now still has enough status to be his wife. Ultimately, this narrative is clearly one dominated by the idea that a man may love as he pleases without consequence, even leaving his wife, while a woman must love her husband forever, or risk the negative branding of an adulteress. This tale also brings to mind a contemporary question about literature itself: can a man really write accurately from a woman’s perspective? Should he? And that, dear reader, you must discern for yourself.​